El Niño – this year and in the future

Impact of global warming on the El Niño-Southern Oscillation (ENSO)

The El Niño-Southern Oscillation (ENSO) drives substantial variability in rainfall, severe weather, agricultural production, ecosystems and disease in many parts of the world. Given that further human-forced changes in the Earth’s climate system seem inevitable, the possibility exists that the character of ENSO and its impacts might change over the coming century. Although this issue has been investigated many times during the past 20 years, there has been very little consensus on future changes in ENSO, apart from an expectation that ENSO will continue to be a dominant source of year-to-year variability. Here we show that there are in fact robust projected changes in the spatial patterns of year-to-year ENSO-driven variability in both surface temperature and precipitation. These changes are evident in the two most recent generations of climate models, using four different scenarios for CO2 and other radiatively active gases. By the mid- to late twenty-first century, the projections include an intensification of both El-Niño-driven drying in the western Pacific Ocean and rainfall increases in the central and eastern equatorial Pacific. Experiments with an Atmospheric General Circulation Model reveal that robust projected changes in precipitation anomalies during El Niño years are primarily determined by a nonlinear response to surface global warming. Uncertain projected changes in the amplitude of ENSO-driven surface temperature variability play only a secondary role. Projected changes in key characteristics of ENSO are consequently much clearer than previously realised.

Moving target: ENSO and seasonal forecasting over the Western Maritime Continent during the northeast monsoon

Tropical interannual variability, particularly about the Pacific Rim, is generally dominated by the El Niño-Southern Oscillation (ENSO) signal. While existing studies show that mean precipitation over much of the Maritime Continent indeed contains a strong ENSO signal, this signal is weaker over the western Maritime Continent, which covers the Malay Peninsula, Borneo, Sumatra, and west Java. This is particularly so during the wet season (northeast monsoon or boreal winter monsoon). As part of our seasonal forecasting effort for Southeast Asia, the teleconnection between tropical Pacific sea surface temperature and the northeast monsoon mean precipitation was evaluated over the western Maritime Continent for the period of 1980 to 2010 with a few simple statistical methods. Interannual variability of sea surface temperature from the HadISSTa was compared with interannual variability of precipitation from GPCPb, CMAPc and ERA-Interimd. In addition, precipitation for the period of 1998-2010 from TRMMe was used to verify the finer spatial structures in mean precipitation. From our results, we make a few recommendations on the type of process-based forecast products that are desirable for the western Maritime Continent.

The tropical Pacific has been warming steadily over recent months, which is a known precursor to an El Niño event. Many of the dynamical models from about 20 global climate centres predict this warming to continue for the rest of the year. Based on the latest observations and model predictions, there is a high likelihood for El Niño conditions to develop in the 2nd half of 2014. However, there is considerable uncertainty to the likely strength of the predicted El Niño, which translates to challenges in quantifying potential impact on average regional and local weather conditions. Here we will be discussing the typical impact of El Niño on rainfall over Singapore and the region, analyse observations on recent El Niño development as well as the model guidance of El Niño predictions in the next few months. An assessment of regional and local rainfall situation so far and possible impact in the comings months will also be presented.

About the Guest Speaker

Dr Scott Power is a Senior Principal Research Scientist and research manager in the Australian Bureau of Meteorology’s Research Centre. Dr Power has published extensively in the international scientific literature on El Niño, global warming, and decade-to-decade climate variability. He is the former head of operational climate monitoring and climate prediction in the Bureau, and a former acting head of Australia’s National Climate Centre. He is a Coordinating Lead Author of the latest Intergovernmental Panel for Climate Change (IPCC) report and a member of the Core Writing Team for the forthcoming IPCC WGI-III Synthesis Report. He previously led the development of a multi-million dollar project to enhance climate prediction services in many Pacific Island countries and he co-led the development of the $20m Pacific Climate Change Science Program to assist 15 countries in the central and western Pacific adapt to climate change. 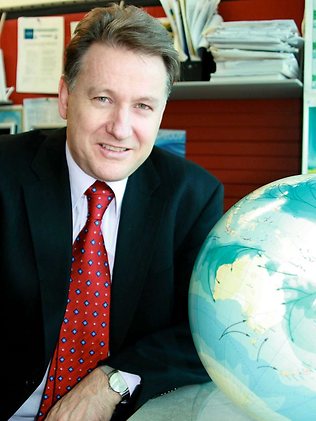