This presentation will explain the importance of communication by research agencies and will cover the key elements associated with effectively explaining climate change to a variety of audiences. Mr Paul Holper will use his 25 years’ experience as a climate change programme manager and communicator to recommend how best to communicate with impact. The talk will briefly examine the history of climate change communication, identify communication challenges and build on extensive Australian and international experiences. Important elements of effective communication include tailoring messages for your audience, building on existing knowledge, being positive, suggesting actions and using a range of different communication methods and tools.

Paul has organised and convened many international climate change conferences. In 2014, he co-facilitated an international workshop in Chennai, India. This Au said-funded event attracted delegates from 14 countries around the Indian Ocean rim to share their experiences and needs relating to climate change adaptation. From 1989-2002, Paul worked as a Communication Manager at CSIRO.

Paul has an honours degree in chemistry and qualifications in science communication and education. He has written 20 science books for children and for adults, including Climate Change: What You Can Do About It, published by CSIRO Publishing and Pan Macmillan. 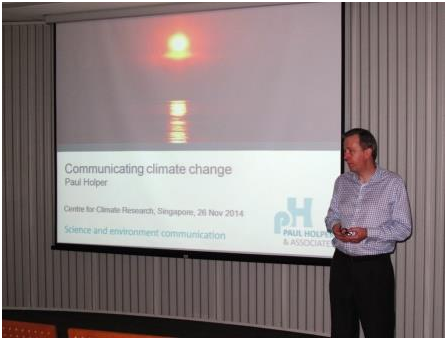