Singapore is a small island in tropical maritime continent at the southern tip of South China Sea. The unique geographical feature imposes great challenges to the production of forecasts over this region on timescales ranging from hours to months. Various scales of weather processes may dominate Singapore in different seasons, sometimes appear during the same day. To understand the key weather and climate processes is one of the responsibilities for CCRS scientists, and is the foundation to improve modelling and forecasting capability and so provide quality information weather services to various communities across Singapore in terms of accuracy, timeliness and better understanding of the potential influence or impact.

Climate change information at the regional-to-local scale is necessary to assess the impacts of climate change on human and natural systems and develop suitable adaptation and mitigation strategies at the national level. An important component of climate change information at regional-to-local scale is knowledge of observed climate variables and any trends in these, especially for extremes which are often associated with climate related impacts. These are important for several reasons, to provide baseline information relevant to assessing current vulnerability to extremes, to provide an assessment of whether there are already climate changes being observed locally and to provide good data for the validation of models run over the region.

Two of the largest uncertainties in making climate projections for Singapore and for Southeast Asia are:

Tropical convection (or full-depth of the troposphere thunderstorm complexes) is the dominant source of rainfall in our region. The latent heat of condensation released in these convective complexes is also the dominant driving force for the large scale wind circulation of the region, including the monsoon.  A number of projects are ongoing on studying tropical convection and its relationship to larger scale circulations such as the Madden-Julian Oscillation (MJO) and cold surges.

A number of projects are being undertaken on understanding how ENSO affects our climate in current weather. 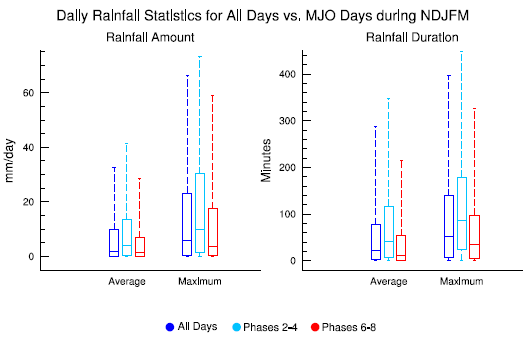 Studies of drought and meteorological conditions leading to haze

Two of the major weather related high impacts on Singapore are haze events and droughts, including extended dry spells. Both phenomena are related to large scale drivers including the Madden-Julian Oscillation on the intra-seasonal time scale and to ENSO (particularly El Niño events) on the inter-annual time scale. A project is being undertaken to document the inter-annual variability of haze events and droughts events over Singapore.  This will focus on the meteorology of the events, and will be a lead in to later studies on seasonal forecasting and climate change aspects of the two phenomena.

The most recent major climate extreme affecting Singapore was the February 2014 drought whereby Singapore recorded its lowest rainfall on record for that month. The mechanisms behind this event are being investigated.

CCRS is developing the capability to analyse in near real time the meteorological causes of notable weather events. The development of a monitoring analysis and display system, which will make full use of all the international data that is available, will enhance our ability to answer questions about causes of events and also, over time, aid in the understanding of the complex regional weather systems. This activity will also contribute to the future the development of a WMO Regional Climate Centre (RCC) in Southeast Asia.

NWP model is probably the most commonly used method to simulate the weather processes. As a result we need to address how NWP model behaves in such simulation. In the context of simulating short term weather processes, i.e. the initial value problem, the model background error is crucial. The study of background error over Singapore and surrounding region helps us identify the relationship between different model variables over this area and help quantify the significance of the contribution from the observation, with which we are able to know how to utilise wisely the limited local observation with current modelling system.

Sumatra squalls are the common weather pattern which affect the area of Malacca Strait, Malay Peninsula and Singapore; however the formation, structure, and propagation of these squalls are not well studied and understood. A number of studies will be undertaken to document the typical features and investigate the physical mechanisms.  These studies will contribute to the improvement of the MSS’ NWP capability and predictability on these squalls.